Xylitol Toxin Showing Up in More Foods Like Peanut Butter 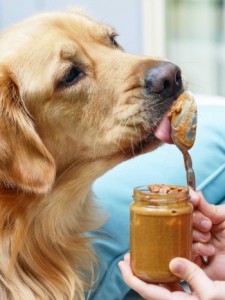 Dr. Greg McGrath wrote a good article on xylitol toxicity and how it is showing up in peanut butter and other foods. Just one more good reason not to give your pet table food!

The low-calorie sweetener xylitol is being used in more and more products made for humans. This compound can cause serious or fatal poisoning if it is ingested by a dog, so owners need to be especially vigilant that it is not accidentally consumed by their dogs or even given to them intentionally by an unsuspecting owner.

Xylitol is a type of compound known as a “sugar alcohol.” It imparts a sweet taste, but has very little caloric content that the body can use. Consequently, it is being used in many products made for human consumption, including chewing gum, candy, mouth washes, in a powdered form for baking and sweetening drinks such as coffee and tea, and recently it has been used in peanut butter. Dogs may ingest any of these substances accidentally, and some owners give peanut butter to their dogs as a treat or to disguise a tablet the dog must be given.

Xylitol is advertised as “natural” because it is extracted from birch bark or corn cobs. If the label says natural, it must be good for you, right? In this case, that’s not true for dogs.

When a human consumes xylitol, it is absorbed slowly over many hours and does not have a dangerous effect on blood sugar. But dogs aren’t just small humans, and when a dog consumes xylitol, it is absorbed very rapidly, in as little as 30 minutes. The insulin-secreting cells in the pancreas see xylitol as a sugar and begin secreting more insulin, but since xylitol actually has very little caloric content, blood sugar levels drop precipitously in the dog. This can lead to severe or even fatal hypoglycemia (low blood sugar).

As the blood sugar level drops, the dog may become disoriented or unresponsive, have seizures or go into a coma. There is also a direct toxic effect on the liver in dogs that is not fully understood, but either the hypoglycemia or the liver toxicity can be fatal. The hypoglycemic crisis can cause death in just a few hours, or the dog may die within a few days from the liver damage.

And it doesn’t necessarily take a large amount of xylitol to poison a dog. One or two sticks of gum are enough to cause toxicity in a 10-pound dog.

And just to complicate matters for those trying to determine if a product contains xylitol, it also goes under several different names, including xylite, birch sugar and birch bark extract.

How about cats? It turns out that the same toxic effect doesn’t seem to be a problem in cats. Cats are not dogs, and neither of them is a small human. This is a fact that veterinarians have to discuss with clients on a daily basis.

It would behoove dog owners to check their shelves, refrigerators, pockets and purses to see if they have any products that contain xylitol. Particularly scrutinize anything that says “sugar free” or something similar on the label. Store them where it’s impossible for your dog to get to them, and be prepared to tell your veterinarian you have xylitol around of your pet suddenly gets sick. Your pet’s doctor doesn’t want a needless tragedy to occur if it can be prevented by securely storing these products or removing them entirely from your home.